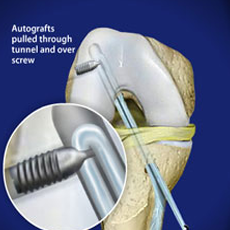 The anterior cruciate ligament (ACL) is one of the most commonly injured ligaments of the knee. The incidence of ACL injuries is currently estimated at approximately 200,000 annually, with 100,000 ACL reconstructions performed each year. In general, the incidence of ACL injury is higher in people who participate in high-risk sports, such as basketball, football, skiing, and soccer.

Approximately 50 percent of ACL injuries occur in combination with damage to the meniscus, articular cartilage, or other ligaments. Additionally, patients may have bruises of the bone beneath the cartilage surface. These may be seen on a magnetic resonance imaging (MRI) scan and may indicate injury to the overlying articular cartilage.

It is estimated that 70 percent of ACL injuries occur through non-contact mechanisms while 30 percent result from direct contact with another player or object.

The mechanism of injury is often associated with deceleration coupled with cutting, pivoting or sidestepping maneuvers, awkward landings or “out of control” play.

Several studies have shown that female athletes have a higher incidence of ACL injury than male athletes in certain sports. It has been proposed that this is due to differences in physical conditioning, muscular strength, and neuromuscular control. Other hypothesized causes of this gender-related difference in ACL injury rates include pelvis and lower extremity (leg) alignment, increased ligamentous laxity, and the effects of estrogen on ligament properties.

Immediately after the injury, patients usually experience pain and swelling and the knee feels unstable. Within a few hours after a new ACL injury, patients often have a large amount of knee swelling, a loss of full range of motion, pain or tenderness along the joint line and discomfort while walking.

**Call the office of Dr. Darren Keiser to set up an appointment & learn if acl repair is right for you.