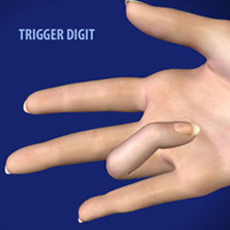 Trigger finger limits finger movement. When you try to straighten your finger, it will lock or catch before popping out straight.

Trigger finger is a condition that affects the tendons in your fingers or thumb.

Tendons are tissues that connect muscles to bone. When muscles contract, tendons pull on bones. This is what causes some parts of the body to move.

These flexor tendons control the movements of the fingers and thumb. When you bend or straighten your finger, the flexor tendon slides through a snug tunnel, called the tendon sheath, that keeps the tendon in place next to the bones.

The flexor tendon can become irritated as it slides through the tendon sheath tunnel. As it becomes more and more irritated, the tendon may thicken and nodules may form, making its passage through the tunnel more difficult.

The tendon sheath may also thicken, causing the opening of the tunnel to become smaller.

If you have trigger finger, the tendon becomes momentarily stuck at the mouth of the tendon sheath tunnel when you try to straighten your finger. You might feel a pop as the tendon slips through the tight area and your finger will suddenly shoot straight out.

The cause of trigger finger is usually unknown. There are factors that put people at greater risk for developing it.

**Call the office of Dr. Darren Keiser to set up an appointment & learn if Trigger Finger Release Surgery is right for you.